Debates rage on over "pit bulls" in the newspapers, political forums and other venues across the county on a daily basis. Most of the debate is based upon some incident reported in the news regarding a dog described as a pit bull. As I deal more and more with "pit bulls" and speak to many people regarding the issues involved with these dogs, I realize that many people do not even realize that "pit bull" is not a breed.


Most often, the term "pit bull", as it is commonly used, encompasses three different breeds of dog: the American Pit Bull Terrier, the American Staffordshire Terrier and Staffordshire Bull Terriers. More accurately, the term "pit bull" describes a type of dog, not a breed. This is not a surprise or otherwise earth-shattering news to many people. However, it is news to many of the people charged with making laws, enforcing laws, and reporting incidents regarding these types of dogs.

Some laws which have been written to ban certain breeds, have enlarged the meaning of the term "pit bull" to include other bully breeds, such as the American Bulldog. Essentially, some people have created their own definition of "pit bull" in order to fit their agenda.


One of the biggest objections I have to the misuse of the term, is that even rescues and shelters use it to describe adoptable animals in their care. I have been in many a shelter where they have on a dog's cage card or description "Pit Bull" for breed.


I would look to those reading this post to comment regarding their experience in the use of this term and in the different ways they have seen it used. I certainly do not claim to be an expert, but if we are going to be using the term in government, media, and the like, let's at least know how to use the term properly.
Posted by Richard Angelo, Jr. at 10:12 PM 1 comment:

Decided today that it was time to revive this blog. It has been awhile and have been very busy dealing with many issues related to animals in the legal world.

In doing some research recently for a case, I was reviewing numerous news articles throughout Michigan dealing with "pit bulls". While I usually take the articles for what they are worth, the comment section is usually where I learn the most about people's knowledge and feelings toward the breed. In most cases, I am utterly astounded by the ignorance of most people regarding these animals. Rarely, I am actually impressed with someone's knowledge and reasoning regarding issues that arise with the "breed".

In doing some of the work that I do, I have been lucky enough to deal with many experts, locally and nationally, who have experience in dealing with "pit bulls". Over the next month or so, I will try use this space to educate and enlighten people as far as "pit bulls" are concerned. Since I am not an expert on these dogs, by any stretch of the imagination, I will utilize information and tools from people who regularly deal with the bully breeds in hoping to bring a better understanding of these animals. Starting first with a description of what is a "pit bull". I will give you your first hint...it is not a breed. I hope you all enjoy.
Posted by Richard Angelo, Jr. at 9:45 PM 1 comment:

Federal District Court Judge David Lawson sentenced one of the people involved in this case originating out of Huron County to 6 months in prison for his involvement in the case. The other 2 co-conspirators will be sentenced at a later date. From the court filings, it appears that the man will have 2 dogs actually returned to him as well.

One of the big secrets in this case that has not been reported in the limited media coverage is what will be happening to the over 40 dogs seized. The below article reports that some of the dogs will be kept by the Kent County Humane Society.

Federal prosecutors have stated that Michigan State law requires the dogs to be killed if they were involved in a dog-fighting venture. Luckily for some of the dogs, it would appear that Judge Lawson disagreed with that interpretation.

Updates regarding the remaining defendants will be posted when available.
Posted by Richard Angelo, Jr. at 10:15 AM No comments: 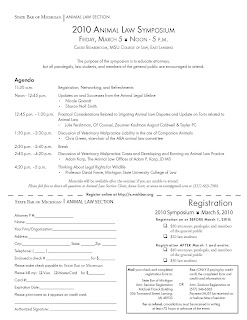 Just a reminder that the Animal Law Section of the State Bar of Michigan will be holding its annual Symposium this Friday, March 5, 2010 from Noon until 5 pm at the MSU College of Law in Lansing.

Public is welcome. Topics will include the section's Animal Legal Lifeline, veterinary malpractice issues, and other matters related to litigating animal law disputes. Top animal law attorneys in Michigan will be on hand as well as some national speakers on the topics. We hope to see you there. It will be an informative and entertaining event for all.

This shelter, located in Stanton, Michigan, has been a train wreck for years. It has been cited numerous times by the Department of Agriculture for violations in the past and has long been the focus of great controversy. Many of the violations have not been corrected by the shelter. Further, an independent evaluation of the shelter in 2009 revealed numerous areas of concern, including: failure to properly account for animals coming in to the shelter (there were allegedly 37 unaccounted for animals in one month alone), cleaning kennels with a bleach solution without removing the animals from the kennel, and other easily remedied issues. To date, many of the issues raised in the evaluation have not been corrected.

Last year, the County ended its long-standing contract with a USDA Class B dealer, which allowed the dealer to take animals from the shelter for sale into medical research in exchange for his company disposing of carcasses of animals killed at the shelter. Since the termination of the contract, the County Commissioners and their various sub-committees have done very little to decide the future direction of the shelter, let alone set a course which would allow this shelter to succeed in the future. This is the most polite way I could think to describe the county's actions, or lack thereof, since the termination of the Class B Dealer contract. Unfortunately, the the ones suffering at the hands of the County's lack of action are the animals and the people who care about them.

I have personally met a number of truly committed, wonderful people trying to make this shelter a place for which the county no longer has to be ashamed. Unfortunately, their efforts have constantly met opposition from various county officials for reasons that often defy logic.

Visit http://www.cccmontcalm.org/ for some of the background information on the issues facing the animal shelter. The group is also on Facebook (http://www.facebook.com/index.php?lh=e90b61d954bb3e88da140a6a90496b8a&#/pages/CCCMontcalm/282168059816), and some really good information regarding the latest issues facing the shelter is available there.

A joint meeting of the Animal Advisory Board and the Law and Courts Committee of the county commissioners will be held February 10, 2010 at 2 pm for those that can attend. Issues regarding a ventilation system for the shelter, installation of a crematorium and other issues may be discussed. Citizens of Montcalm County and others with a vested interest in the shelter should surely attend.
Posted by Richard Angelo, Jr. at 6:38 PM 2 comments:

The State Bar of Michigan Animal Law Section's annual Animal Law Symposium will be taking place in the Michigan State University Law School building on March 5, 2010. Topics will be geared toward attorneys, but all are welcome to attend. Subject matter this year will be related to Litigating Animal Law Disputes.

The symposium was well-attended last year and we hope to have as many people in attendance this year. This program is not just for attorneys. More detailed information will follow when available.
Posted by Richard Angelo, Jr. at 10:47 AM No comments:

I just wanted to take a minute to say Happy Holidays and update the story regarding Cola, the pit bull mix, whose story was the first post in this blog.

Almost one year after Cola was taken in by a wonderful organization called the Colorado Pit Bull Rescue, he was adopted by a great family and is doing very well. Here is a link to the most recent chapter in his story.

Cola's story is a great one when you think about all of the people who gave their time and money to help save him. Much of the credit goes to the Colorado Pit Bull Rescue and the wonderful work they did in caring for Cola for the time he was with them. This is a really great organization whose work stands out even more given that they operate just outside of Denver, the city with the most infamous "pit-bull" ban in the country.

If you ever find yourself looking for a place to make a donation of time, money, or both, please consider giving to this organization. They are wonderful people. Please check out their website and blog also.

Happy Holidays to all and thank you to everyone who helped in saving this one dog's life.
Posted by Richard Angelo, Jr. at 10:27 PM No comments: